Showing posts from July, 2013
Show All

The Kigali express will complement and  compete with Kenya-Uganda Railway THE GOVERNMENTS of Kenya, Uganda and Rwanda have agreed to construct a 2937KM Standard Gauge Railway line from Mombasa Port Kenya, Via Kampala- Uganda to Kigali in Rwanda. The project will cost an estimated US$13.5 billion broken under; Railway line construction $11.5 billion and rolling stock US$2 billion. And to underline the seriousness with which the project is viewed, the three governments have agreed to fund the project jointly. Already Kenya Railways Corporation has floated a tender for the design construction and supervision of the Railway line. Also the Kenya government, reports last week had it, is already in talks with China seeking funding for the project. Uganda and Rwanda are also said to be warming up to China for the financing of the same project. This development has observers cautioning that the West risks being locked out the gravy train. They say that China funds only proje
Post a Comment
Read more

Blast the Chinese invasion in Africa

One Moment a home.... Next a heap of rubble DAMN THE CHINESE INVASION in Africa. They have disrupted our lives.They are so obsessed with excavating! They and their ugly excavators compete with moles in their obsession to build webs of roads that destroy the environment.  Like moles, they are no respecters of persons and their property even convenience.  Forests, homes, estates, animal reserves And fancy roads like ours have come down due to the Chinese’ excavation frenzy. People, cars, animals and drunkards are in tears because the Chinese have invaded and disrupted their lives. I am one of those who have suffered loss due to Chinese. I live in a neighborhood where moles-sorry Chinese -are busy at work destroying the environment I am used to. They have dug up two roads that my contraption that passes for a car is familiar with. They have created a series of turns and twists that demand my complete sobriety to drive on these roads – sorry cattle tracks that are similar to
Post a Comment
Read more 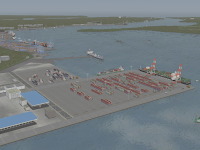 An Aerial view of the Mombasa port THE CONSTRUCTION OF the second container terminal at the Port of Mombasa in Kenya   is three months ahead of schedule, we can report. This is the second project in the on-going upgrading of the Port into a Mega port to be completed ahead of the schedule in less than a year. A mega port is a full service port that has the capacity to handle post-Panamax vessels. These are vessels that can carry more than 10,000 TEUs and are up to 350 metres long. Last year, the deepening of the port and the widening of the Likoni channel and the turning basin was completed four months ahead of schedule. According to the Managing Director of the Kenya Ports Authority, by the end of May this year, construction of the second container terminal, which began last December, was 38 per cent complete. At that point, he said, it was three months ahead of schedule meaning that Phase of one of the project could be complete by the end of 2015. Initially, the proj
Post a Comment
Read more

A prototype of Nairobi Railway city THE KENYA RAILWAYS Corporation, a public utility, is shopping  for investors to develop mini-cities on its idle land.The project to be build on 320 acres of land spread across three cities in the country will cost US$$3.0 billion.  The mini cities will change the skyline in some of the cities, increase business activity, including tourism and light manufacturing in additon to turning the host cities into transport hubs. The corporation is thus targetting the kind of developers that are bidding for leases in Konza techno City. To be developed jointly with investors on a long-term lease, the projects will be developed in Mombasa, Nairobi and Kisumu. The developments will  include; ultra- modern Railway stations, direct rail links with the international airport in the host city, commercial buildings, an industrial park, shopping arcades and resorts, malls and restaurants among other facilities.  A prototype of Mombasa  Railway city The pr
Post a Comment
Read more

An oil Rig: More finds, quantity upgrades production in sight in Kenya KENYA COULD  start producing oil by 2019/20-"In 6-7 years’ time" says the IMF in document published in April this year. The document, IMF staff report on Kenya, confirms that, the report of the oil find and its commerciality are real. It says that since the find in May 2012, some 23 oil prospecting companies have come to Kenya for prospecting licenses. This report comes hot on the heels of a report that Kenya’s Rift Valley could be sitting on 10 billion barrels of crude oil. The Business channel, Bloomberg reported in April that Kenya’s oil stocks in the Rift Valley could top 10 billion barrel-enough to last Kenya 300 years. Meanwhile, Tullow oil has announced another find in South of Lokichar Basin, also in the Rift valley. It also revised upwards the production estimates in the earlier two finds to 5000 barrels a day a piece from the earlier 2850 barrels a day. The latest testing dat
Post a Comment
Read more
More posts