Showing posts from January, 2012
Show All

Africa: the next big investment story

January 23, 2012
Welcome to Africa, the Dark Continent with a bright future. Just a short decade ago, Africa was the “hopeless continent.”  However, it has turned the corner and is now “the hopeful continent.” And given the state of things, such bold statements about the continent are likely to become common place. It is the next big investment story. Some analaysts call it the " final frontier."  What has happened? How did Africa turn its fortunes so fast?  Four things happened. No. five namely:  Africa’s isolation; the rise in commodity prices; good house keeping; Economic growth and the entry of China as an investor in the continent. And finally, frequent economic meltdowns in the North. Africa has a low correlation with the global economy. Consequently, the continent is not significantly affected by economic crises in the north. In the last decade or so Africa has shrugged off three global economic meltdowns that devastated the rest of the world. In 1997, Africa shrugged of
Post a Comment
Read more

January 16, 2012
Thanks to goods rains. The dams are full, farms are rich with crop and there is plenty of fodder for the livestock and the beast of the wild. Inflation in East Africa is set to decline significantly beginning the end of this month, we can report. So far, prices of food, fuel and electricity are inching down.  And these are the drivers of inflation in the region. Poor rains in the last season resulted in poor crop yields, parched fields and drying up water reservoirs. Coupled with instability in the foreign market and a rising crude prices, inflation in East Africa went wild, rising from single digit figures to the late teens in Tanzania and Kenya, and up to 30 percent in Uganda in ten months.  In Kenya inflation is has peaked at 19.72 per cent recorded at the end of November, It peaked at 30 per cent in Uganda and in Tanzania , it is expected to peak at 19.2 per cent posted in November. By the end of December 2011, deflation picked up pace going down to 18.76 per cent
Post a Comment
Read more

President Jakaya mrisho Kikwete of Tanzania: The Political class is hurting Tanzania's interests I define whimsical protection as a form of protection that is not based on economic factors. It is impulsive and erratic and does not engender any economic benefits on the protected country or society.  In worst case scenario it stalls; investment, technology transfer, production and skills acquisition in a country. It is a recipe for deeper poverty and underdevelopment. Such is the case with Tanzania , a country in East Africa . Although the second largest economy in the 130 million people East Africa Common market bloc, she is the laggard.  Protectionism initially served a purpose. Her weak manufacturing sector needed some form of protection from the stronger Kenyan manufacturing sector. This resulted in asymmetrical tax system in which Kenyan exports were taxed at 90 per cent discount while Tanzania and Uganda Exports came to Kenya tax free. This resulted in
Post a Comment
Read more 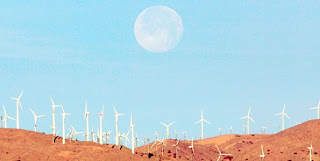 A wind power farm: LWTP is building a similar project. Kenya , East Africa ’s largest economy is weaning itself from dependence on hydro-generated electric power. She is now turning to other renewable sources of energy such as wind and thermal power. The country 1173 MW and consumes almost the entire lost leaving no excess capacity. Electricity generation requires excess capacity to deal with any unforeseen occurrences. Kenya ’s second wind power farm will come on stream at the third quarter of 2012.   Of the 1173 MW generated an estimated 400Mw is hydro, some 200 MW is generated from Geothermal and the rest is met by expensive Thermal energy plus some little imports from Tanzania and Uganda . Consequently, the country sole power generator, KenGen, is running full steam working on clean energy sources. Among these are Geothermal from which it expects to generate some additional 4000 MW in the next four years. It has started a small-scale wind power which is already feed
1 comment
Read more
More posts