Showing posts from January, 2013
Show All

January 31, 2013
THE APPETITE for African sovereign debt in the international capital market is growing. And Africa itself is salivating for more.  The conditions favour Africa. The continent needs money to finance its development programme.  Investors on the other hand are looking to diversify their portfolio. The result is a high demand for Africa’s sovereign debt.  Consequently, this year, the international capital market could witness some huge issues by African governments. Data available to this publication shows that All sovereign debt issued by African governments in the last two years was oversubscribed.in 2011 and 2012 a number of sub-Saharan African countries have issued debt worth more US$2.2 billion-and all of it was oversubscribed. Namibia, Nigeria and Senegal raised US$500million by issuing sovereign debt in the international capital market in 2011. Last year Zambia raised some US$750 million. The debt was subscribed at US11.9 billion forcing the country to up its uptake to $75
2 comments
Read more 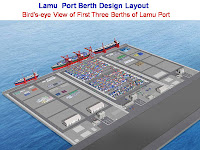 Lamu Port: Advertised LAPSSET US$23 BILLION, Konza Techno city $7 billion, Kenya Railways Upgrade $2.4 billion, Dar-Chalinze super highway$530 million, Kigamboni bridge $140 million, Kigamboni city $6.7 billion.  That is US$40 billion worth of business opportunities in east Africa. And there are more. Even before the discovery of hydrocarbons in eastern Africa coast, governments were already investing in transport and energy infrastructure to support national productivity. The mainly agriculture based economies were already being diversified to include basic manufacturing, trade and services.  Robust economic growth coupled with diversification spawned increased demand for more and better roads, Electricity, telecoms and Ports. Initial investments in expanding existing infrastructure exposed their inadequacy which led to massive investments in infrastructure. Lake Turkana Resort City The result:  huge infrastructure projects which only a few years earlier woul
Post a Comment
Read more

Konza Technocity's Financial District: Designed  to be a Financial hub ALL LEGAL AND LOGISTICAL hurdles that frustrated the launch of Konza Techno City last year have been resolved. The ground breaking ceremony, which was postponed several times, last year, will be held next, week, January23 rd . All missing links are now in place: The statutory authority to oversee the city’s development, the Konza metropolitan Development Authority and a management board are now in place. After the ground breaking, the US$7 billion Konza Techno City will start rolling. First off the blocks will be work on the infrastructure, roads and water and waste water disposal systems. Already a Chinese government owned Construction Company, Shanghai Corporation for Foreign Economic & Technological Cooperation (SFECO) is eyeing construction of roads and other social infrastructure.  A US$200 million multipurpose water dam funded by the Kenya government is under construction and is expec
Post a Comment
Read more 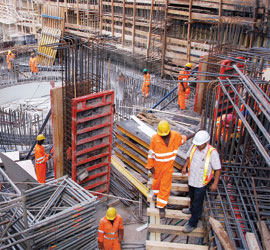 CRITICS OF AFRICA's growing prosperity ask whether it is real arguing that it is exaggerated. Some critics say that the boom is a bubble that can burst at the slightest prick. African commentators on the other hand argue that Africa’s prosperity is understated, arguing that the impact of the informal sector, a key employment generator in Africa is underrated. The critics point at the low level of industrialization as a pointer to under-development of Africa. There are some truths in the critics’ arguments. But their dissent seems to arise from the usual confusion between economic development and economic growth. No wonder they are used interchangeably because the both mean transition from one stage to another. The two terms sometimes generate the Chicken-egg sort of debate-which came first. An hydro plant under construction in Uganda However, the subject matter here is about Africa’s long economic boom. The truth is Africa is on the second decade of persistent economi
Post a Comment
Read more

The second scramble for Africa 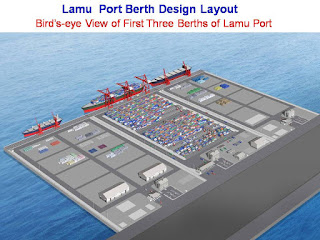 The proposed Lamu  transport corridor in Kenya : A potential beneficiary of the East-West rivalry   AFRICA IS IN the middle of a long economic boom. And over the next five years, she shall be the fastest growing region in the world posting more than five per cent growth per year, says a World Bank report. Consequently, Africa -“a hopeless Continent” just a few years ago- is now something of a village beauty-attracting plenty of suitors. Even the once cynical West is beginning to sit up and take note-with their cheque books on hand.  And this new attention on the continent is taking the shape of a second scramble for Africa.This time around it is not the Berlin Conference seeking to dissect Africa into spheres of influence by Europe. Contrary to the first scramble that under-developed Africa, the second scramble  is a major competition to develop Africa by both East and  the West. The east is led by China, arguably Africa’s largest benefactor in the recent past. Although
Post a Comment
Read more
More posts