Showing posts from August, 2014
Show All

August 29, 2014
KENGEN, KENYA'S leading power generating company, has drilled o the biggest geothermal well in Africa and fifth biggest in the world. The well, christened Olkaria OW-921 has a production capacity of the 30MW of geothermal energy.  The 3KM deep well is located at Ol karia and is one of the five largest geothermal wells in the world. It was completed in 46 days. The firm is the leading geothermal in Africa. This new discovery firmly establishes Kenya as major geothermal power house in the world. It is also a major help in the realization of the goal to produce 5000MW in the next four years. The well will be connected to Olkaria IV power station. Ol Karia geothermal fields are located some 230 Kilometres North west of Nairobi, the capital city. Meanwhile, KenGen will commission an additional 280MW of geothermal power next month. This will raise her generating capacity to 11462MW. The firm plans to produce another 30000MWby 2018 bringing her total capacity to more than 500
Post a Comment
Read more 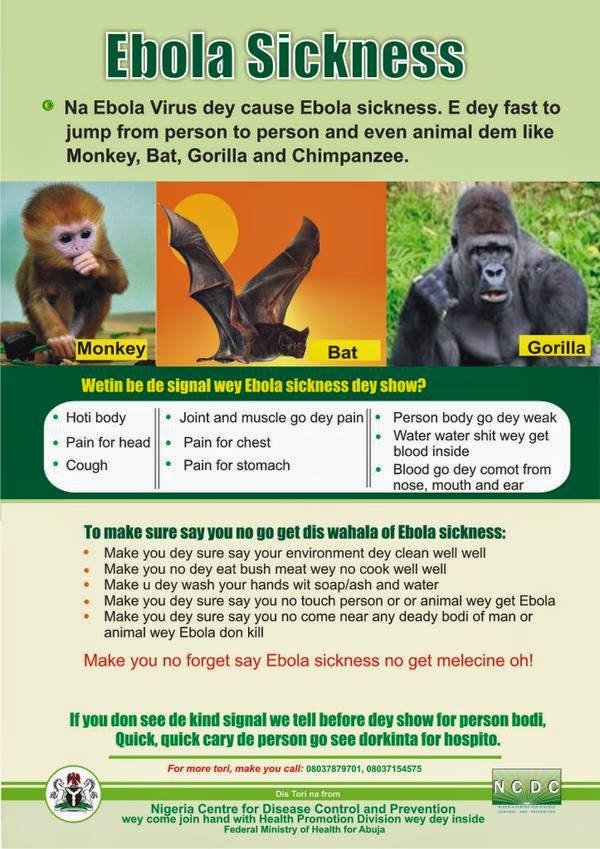 A Poster from CDC&P Nigeria Don't eat bushmeat Keep calm and carry on- The Economist THE FEAR OF THE DREADED  disease, Ebola, what we shall call Ebolaphobia, is proving more disruptive and expensive than the disease itself. Although the numbers are not yet crunched, some indications are emerging. The affected parts of West Africa will suffer significant economic costs. For instance Liberia which has already lost $12 million so far and has already indicated that she will miss the projected GDP growth of 5.9 per cent in 2014 by significant margin. Ebola will shave off two percentage points from  Sierra Leone’s growth target. As of now, projections have been downgraded to 12 per cent this year from the projected 14 per cent.  It could shrink even further if the virus is not controlled soon.  In Nigeria, the economic cost of Ebola is tagged at $3.5billion dollars. Yet only 12 people have been confirmed to be infected so far, with two of them dead.  Although $3.5 o
Post a Comment
Read more

New World Order but watch out for the pitfalls

Trade, not aid is the new mantra THANKS TO THE BIRTH  of China as the leading developing economy, the new world order has been born. In the new order driven by the corporate sector, politics is taking a back seat as Corporate Moguls push the aficionado in the direction of  opening new markets.  In this new order, such fancy ideologies as “human rights,” civil society good governance and yes, democracy are being sidelined.  The new mantra: trade and investment-not aid. In recent weeks, we have seen the West, which champions such lofty issues as gay rights tone down on such issues in favour of doing business with the developing world, especially Africa.  And the developing world, specifically Africa, has taken the center stage in this new world order.  This is because the continent is in the second decade of robust economic growth and is headed for the pole position. A growth pole region is a region whose growth sparks growth in other regions. In tandem with the changed
2 comments
Read more 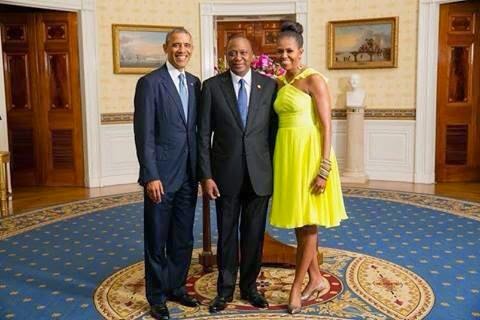 The events at White House dinner THANKS TO THE DISMAL SCIENCE, the US government has caved in to pressure from its corporate sector that is keen to do business in Africa. The country is now hosting two score plus African heads of state in Washington DC in a history setting US-African leaders’ summit.  And Americans must endure traffic jams for two days because Africa is in town.  That the Summit is driven by economics is not in doubt. According to Al Jazeera, US$1 billion in business deals is on the table.  Africa itself is not talking about aid. It is talking investment, trade –economics.  It is talking to corporate America and corporate America is listening. This is a diplomatic coup as the government will also have to listen to its citizens. The west has woken up to the fact that Africa is driving its own agenda. It needs trade, investment and infrastructure development. These three and the rest will fit in place, so goes the Africa script.  The west has finally sat u
Post a Comment
Read more
More posts