Showing posts from October, 2021
Show All

Why did Tanzania export gold via Uganda and Burundi in 2020?

According to the Bank of Tanzania, the country earned US$2.9 billion from gold exports last year.  This, the bank says, was a 32 percent increase over the $2.2 billion earned the previous year.  According to Tanzania invest , the major destinations for Tanzania’s gold exports are South Africa, Switzerland, and India. However, multiple reports indicate that Tanzania used her neighbors, Burundi and Uganda, to export her gold last year. The reports do not explain the shift of destinations to the Middle East via her neighbors. It does not explain the sudden change in consumer behavior in Uganda and Burundi, two countries teetering on poverty, from basic goods to luxuries such as gold. Neither do they explain why Tanzania could not export her gold directly to the market This leaves some hanging questions such as; Did the closure of Airports and Seaports shut the doors to Tanzania’s exports? Was she magnanimous to her neighbors in dire straits? or was she afraid, afraid of what? What was t
Post a Comment
Read more

The West is out to kill Africa’s development agenda 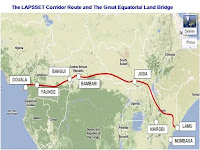 The Equatorial Land  Bridge. Will cut Travel time between East and West Africa to two days  According to the Africa Development Bank’s  Africa Economic Outlook for 2018, Africa needs to invest a total of US$1.2 trillion over the next seven years on productive and profitable infrastructure projects.  This works to an average spend of US$170 billion a year at the top end. Of this, the continent, through budgetary allocations and donor support, can manage $65 billion a year, leaving a yawning gap of US$105 billion or a total of $735 billion over the seven-year period. The AEO breaks down the sectoral needs as follows in order of priority: US$ 35-50 billion on energy, $35-47 billion on transport, and $55-66 billion on water and sanitation That is Africa’s development agenda: Building US$1.7 trillion worth of infrastructure in the next seven years. The question is how to fund the large gap.  To its credit, AfDB has created a vehicle, Africa50, to help craft projects to be funded by the
Post a Comment
Read more
More posts