Showing posts from September, 2018
Show All

African market entices the Beast and the Dragon

A Prototype of Konza  ICT City: Some of Africa's ambitious projects Africa is becoming the theatre for economic giants in the East and the West to battle for domination. And because of the demonization campaign going on, we term it the battle of the Beast vs the Dragon. The beast represents the West while the dragon represents China. Africa is rising and its economic prospects brightening presenting mouthwatering opportunities for investors anywhere in the world.  These are Africa’s pluses: a young and growing population. Researchers say that by 2040, Africa will have the youngest and well-educated population anywhere in the world.  A report by Bloomberg back in 2014 said that Africa’s growing population is an asset, not a liability. Being healthy and well- educated, it forms a large pool for labour in the world and also a large market for goods. The report also said that in 2014, Africa’s growing middle class spend $1.3 trillion on consumption. It projects that consum
Post a Comment
Read more

How to go slow on taxes,debts 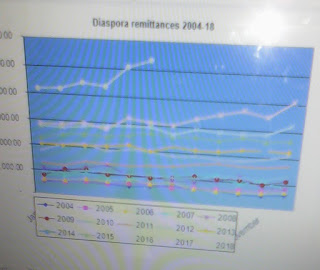 A 14-year analysis of remittances   Remittances by Kenyans living and working abroad have risen 569 percent in the 13-year period from 2004 to 2017. They increased from US$ 338 million in 2004 to $1.9 billion in 2017, posting a massive 44 percent increase a year.  Remittances appear set to pass the US$2.5 billion mark this year if the trend recorded by Central Bank of Kenya is anything to go by.  The data shows that by the end of June this year,  remittances exceeded $1.3 billion. An analysis of the 14-year trend shows that mid-year figures are a pretty good indicator of the trend to the end of the year. Academic research and commentaries by the financial experts indicate that remittances have reduced poverty, enhanced human capital since it helps recipient households to finance education, health care, housing, small businesses, and farming. Recipients tend to put more money into these sectors than those who do not receive.  Research also indicates that remittances are fin
Post a Comment
Read more
More posts