Showing posts from December, 2013
Show All

Design plan of JKIA Green Field  In Nairobi, Kenya IT IS THAT TIME of the year when we take stock of the past year. We review how much progress we made in economic development in east Africa. The region has enjoyed robust economic growth for much of the last decade which robustness has spilled into the current decade. Rather, bottlenecks defined by the robustness of the last decade are being removed in this one. Chief among all bottlenecks was infrastructure -roads, railway lines, hydro dams, geothermal wells, sea ports and airports. There is a reason to focus on infrastructure:  Fossil fuels have been discovered in the top three of the five east common market countries. Consequently demand for infrastructure to service this new economic factor has shot up. Some mega projects, which just a few years ago would have been quietly dismissed as pipe dreams are becoming reality.  Tanzania is so far the leader in discovery of fossil fuel with confirmed 40trillion Cubic feet (TCF)
Post a Comment
Read more 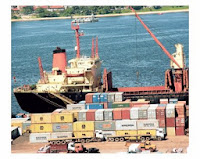 Dar-Es salaam Port:Where the central  Corridor beings and Ends THE PURPORTED rivalry between Tanzania and Kenya on matters of infrastructure development is hot hair, say experts. The time to invest in the central corridor is now. And Tanzania need not feel guilty of seeking investment partners on the corridor.  There is nothing new in Tanzania entering into joint investment projects. She has done the Arusha-Namanga-Athi-river road with Kenya and is also doing the –Voi-Taveta-Holili – Moshi road jointly with Kenya. Therefore the notion that Tanzania is investing on this corridor to spite Kenya is dumb, say experts in Nairobi. A substantial stretch of the Central corridor traverses Tanzania. Therefore it is in the country’s interest to connect unlinked regions for trade and development.  It is also in the country’s interest and those of her neighbours to extend the central corridor to her neighbours since by definition, the corridor ends and starts at the Dar-Es-salaam Po
Post a Comment
Read more

December 02, 2013
AFTER SEVERAL postponements, Kenya’s President, Uhuru Kenyatta will preside over the ground breaking ceremony for Nairobi’s green field terminal at JKIA, to day, December 3 rd .  The US$ 653 million terminal has been has been on the balance for a while due to financial considerations. The terminal will be developed on a design, build, finance, operate and transfer (DBFOT) basis. It will not get any guarantees from the Kenya government. Consequently, financiers were slow footed in taking the risk. The terminal will be guaranteed entirely by the strength of the balance sheet of Kenya Airports Authority, the agency that owns airports in Kenya. However, the authority will now foot 15 per cent of the costs. The agency increased the airport tax to $40 for departing passengers since last year. By now,it has accumulated a tidy sum that it is using to begin construction work at the terminal, said Engineer Joseph Kamau, the Cabinet Secretary in charge of transport. All necessary in
Post a Comment
Read more
More posts