Showing posts from May, 2012
Show All

Will JKIA's T4 fast Track Direct flights to US? 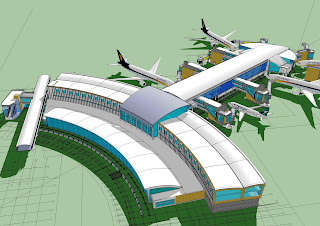 An artist's impression of the  land side of terminal 4  THE COMPLETION OF Terminal 4, at the Jomo Kenya international Airport in Kenya could fast-track Kenya Airways entry into the US. Security features at the new terminal address security concerns of the US government, we can report. The security features include separation of arriving and departing passengers. In the two-storey Terminal 4, arrivals will use the second floor while departures will use the first floor.  The separation will be enforced by use of bold signage directing arriving, departing and transiting passengers to their respective floors to ensure all passengers get to their destination on time, says a KAA internal document. This security measure could fast track negotiations for Kenya Airways to fly to the US. In April, the new America ambassador to Kenya, Scot Gration, told the local press that the separation of passengers in this manner was a one of the conditions that hold the authority for
Post a Comment
Read more

EAST AFRICA is on the path to becoming an energy secure region. And here we are talking about the energy mix including both fossil fuels and renewable sources of energy. Energy security is defined as physical availability, reliability and affordability of energy sources. East Africa qualifies in all respects.  Picture this: Oil and natural gas finds are being updated almost weekly and reports of investment in exploitation of renewable sources energy have become regular in the region. In short, all sources of energy are available in one region. That is an energy secure region. And such a region soon becomes a manufacturing hub due to low cost of energy and its reliability. An oil rig in Action At the rate at which oil and Gas finds in the region are being are being announced, the region could soon stand neck to neck with the giants in the world.  According to the wire service Reuters, the US Geological Survey estimates that 253 trillion cubic feet of natural gas lie off Ken
Post a Comment
Read more

Time for Africa to ditch the West?

May 17, 2012
By all estimates, the economic engine for a majority of African countries has already warmed up and is headed for the runway ready for take-off. Africa is ready to move from frontier economy to an emerging market status or even better.   However, before it gets into the runway, Africa must shed off some unnecessary baggage. This means a closer look at trading and development partners and a closer scrutiny of the continent’s political leaders, say credible researches. The question is; who shall be her partners in this take-off stage? Since the continent cannot wait to take-off, it has to trash or limit its association with laggards who slow it down to a bare minimum. Among the laggards, analysts say, is the West including the eurozone. And a  number of recent analyses on African economies stop short of telling Africa to dump the West. The west, defined to include Western Europe, North America and Japan are going through economic and financial turmoil of their own. The crisis i
1 comment
Read more

Uganda is Kenya’s top export Market in the world

May 15, 2012
UGANDA IS kENYA'S top export market in the world, we can report. The country absorbs more Kenyan exports than Britain and the US combined. While Uganda absorbed US$904 Million worth of Kenyan exports, the UK-US duo absorbed only $862million in 2011. This development shows that contrary to initial fears, intra-east Africa Common market trade is growing significantly. An analysis of trade data reveals a marked growth in trade within the region. Even weak countries like Burundi also export to her partners in the region. A report published by the Central Bank of Kenya shows that , Uganda is the world’s leading export destination for Kenyan exports, way ahead of Britain, the second leading export market for Kenya.   While Uganda consumed US$904 million worth of Kenyan exports in 2011, Britain consumed US$557 million worth. Tanzania came in third ahead of Netherlands and the US. Tanzania, having absorbed US$496 million worth of Kenyan exports is the second largest market
1 comment
Read more
More posts