Showing posts from September, 2021
Show All

Why Kenya's real GDP was larger than the nomial GDP 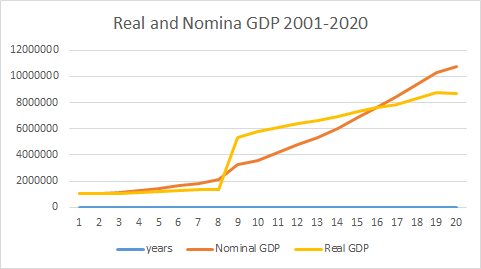 Source: CBK Data The Rebase of Kenya’s GDP accounting year to 2016 from 2009 has revealed a strange phenomenon: Kenya's real GDP was for six years, larger than the nominal GDP. Nominal GDP, which is the sum of a nation’s wealth at current market prices, is always larger than real GDP. To get the real GDP, Economists deflate the nominal GDP by the consumer price index. That the Kenyan case was the reverse, statisticians explain, suggests that the method and system of data collection were inaccurate. They ignored or missed out on the expansion of the economy.  Real GDP overshot the nominal GDP after the sixth rebase from 2001 to 2009. At that point, real GDP was 164 percent higher than nominal GDP. Nominal GDP was estimated at KES3.3 trillion(US$33 billion) while real GDP rose to KES 5.3 trillion($53billion).  According to the Central Bank of Kenya's historical GDP data, real GDP was consistently higher than nominal GDP between 2009 and 2017 when they coincided at KES7.6 trillion
Post a Comment
Read more 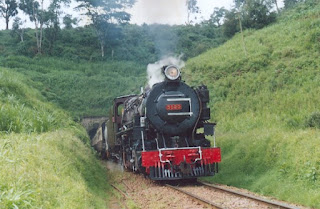 The Lunatic Express 1.0   According to Jimmy Wanjigi, an aspiring Presidential candidate in Kenya, Yes. However. research shows, this is a pipe dream. Some high-speed railway lines cost more than US$26 million a kilometer.  Several factors come into play when it comes to constructing High-speed railway lines. Among these is safety. High-speed trains are just that –high-speed doing speeds ranging from 80Km per hour for freight trains to 360 KPH for passenger trains. In our case, the trains can do a top speed of 120 KPH for passenger trains. Such speeds mean that the trains have to be separated from other transport modes such as road transport. They also have to be separated from other users of the land such as wildlife and livestock for the safety of the trains and their cargo and others. Timely transit times also require such separation. The Ethio-Djibouti Line, the first SGR line in Africa, whose design speed is 160KM cannot do such as speed because it is a level crossing. This re
Post a Comment
Read more
More posts