Showing posts from November, 2011
Show All

The Kenya shilling: used by nearly 60 million people in the bloc Will a monetary union benefit the East Africa Common Market?  Can it succeed? These are questions many “an expert and observer” have asked in the recent past. The economic conditions in East Africa , says critics, are not favourable for a Monetary Union come mid–next year. The experts do not foresee the bloc being ready for a monetary Union until after 2015. What are the problems cited: Weak domestic currencies, rising inflation, economic disparity within the member-states and among the states and general unpreparedness-whatever that means. The Tanzanian Currency: the third weakest currency in EA  Just the same problems the pro- monetary union lobby says a single currency would solve.  The single–currency school accuses the critics of  “crying wolf.” Of creating mountains out of Mole hills.To be sure, the single -currency school avers, inflation in East Africa is high, ranging between 19.8 per cent per
1 comment
Read more

President Jakaya Mrisho kikwete: Combative  president combative Country? Tanzanians have, as usual, stalled the negotiations on the creation of Monetary Union in East Africa . Media reports say that the Tanzanian delegation to the task force on the creation of a monetary union, at Entebbe , Uganda , opposed every item in the background Paper. The background paper will eventually become the protocol for the East African Monetary Union.  At the table for discussion was Article 24 which proposes a universal monetary and fiscal policy. President Kibaki of Kenya: The Giant of the region worrying Tanzania The delegation also stalled article 17, which proposes that member states coordinate tax policies at the community level. This will require that partner states to disclose fiscal policies to other partner states. These two proposals mean that member-states will have to cede some of their sovereign power to a regional authority such as an East African Central Bank and
Post a Comment
Read more

Kenya Al-Shabaab War: will Kenya Succeed where others failed? 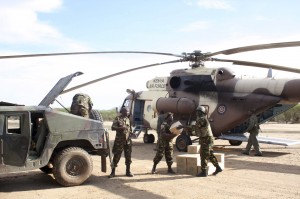 Kenya Soldiers on Ground in Somalia. Will she tame Al Shabaab? Will Kenya succeed where others failed? This question has been asked by many a writer in the last one month. Depending on where one comes from, the answer has been to show that defeating a rag-tag army called Al shabaab will be an herculean task for the Kenyan Military. The Kenyan defense Forces invaded Somalia on October 15 th 2011, in a bid to destroy this terrorist group which was accused of breaching Kenyan territorial integrity.  It was blamed for kidnapping tourists from Isolated Kenya tourist resorts which was a threat to her US$1 billion- a-year industry. The attack has spawned a series of questions among them: what was Kenya ’s agenda and whether it will succeed where others failed? Granted.  Ethiopia invaded Somalia in 2006 and was humbled by the militias. Two years later, Ethiopia withdrew its forces, citing the heavy cost of keeping soldiers in Somalia . More than 10 years earlier, the M
Post a Comment
Read more

Nairobi emerges as the Financial Hub of East Africa

November 22, 2011
Nairobi has emerged as the financial hub of the East Africa Common market bloc, we can report. Thanks to the rapid expansion of homebred multinational banks and the consolidation of the management of foreign transnational banks from Nairobi The foreign banks have actually lost their dominance of the local financial market both in profitability and branch network in the region to indigenous banks. The indigenes have since the mid-2000s taken the foreign banks head on in terms of branch network expansion and innovation. This has made the Kenyan financial market and by extension East African financial market the pitch for stiff competition driven by Kenyan banks. The front runners are Kenya Commercial Bank, the oldest bank in the region, and Equity Bank, ironically the youngest and the most aggressive bank in the region.  In fact, Equity is now the largest bank in sub-Saharan Africa in terms of customer base, boasting of a whopping 6.7 million accounts. The Multi natio
1 comment
Location: Kenya
Read more

Do Kenyans learn from the Mistakes of others?