Showing posts from August, 2018
Show All

KQ: Turning around, plans expansion Kenya Airways Plc  has plugged 30 per cent of its financial hole, reporting a decline in its loss in the first half of the current financial year.   Its losses stood at US$39.7 Million from $56.7 million a year ago. Further, the third largest airline in Africa plans and aggressive growth of its fleet and expand to 20 new routes in the next five years. Consequently, it plans to hire as many as 100 pilots a year over the next five years, Chief Executive Officer Sebastian Mikosz said. The carrier is facing “significant operational challenges” and needs as many as 70 additional first officers and 50 captains to operate its current fleet of 40 aircraft, along with  new aircraft  it plans to acquire, Mikosz said.  The airline, which begins direct flights to New York from Nairobi ion October 28 th , is preparing to take back five aircraft sub-leased to Oman Air Transport and Turkish Airlines from October and needs more people to fly them, he sa
Post a Comment
Read more

Uhuru’s Visits:What’s in it for Kenyans?

The Ngong Tunnel of SGR:  Could spawn Industrialization Binge  Meeting three Heads-of- state in 10 days spread across the globe! That is a tight schedule for Uhuru Kenyatta, Kenya’s President. And we would be right to ask; what’s in it for us? Plenty seems to be the answer.  Let’s start with the US where the President is meeting President Donald Trump. What’s in it for us? Economics: Trade, investment. No begging bowls. Trade and investment –Quid pro Quo. Uhuru is there to market Kenya as an investment destination for American investors – not Government and NGOs.  Kenya needs power, good roads and other infrastructure to unleash its growth potential and create jobs, reduce poverty and improve the standards of living in the country. It targets being a middle-income country (per capita income above $5000) in the near future. To achieve this, she needs investors to build industries in Kenya to put the youth to work. To attract investors, she needs enabling infrastructure and e
Post a Comment
Read more

Why Hydro Energy is losing glitter in Africa 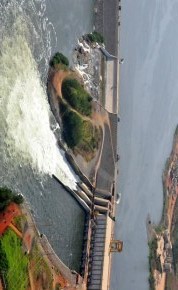 A hydro dam: Losing glitter Every cloud, so the saying goes, has a silver lining. That is true of the electricity generation industry in Africa. Although the continent is blessed with various sources of power generation. It is energy poor. This is because of the tragedy of poverty in the continent. Developing such sources as Hydro, which is the leading source, is expensive and slow to implement and complete.  Estimates show that the current demand for power in sub-Saharan Africa is about 100GW of which 22 percent or22GW, is supplied by hydro. This means that 78% of electricity in Africa is provided largely by thermal sources including diesel-powered generators and Coal. By 2040, electricity demand will rise to 385 GW, and Hydro will generate only 100GW of this, leaving the bulk of the demand to be supplied by other sources. Hydro, despite being a plentiful resource in Africa, is surely the bottleneck to economic progress in the continent. One of the causes for the slow growth
Post a Comment
Read more

The Pride of Africa: leading the way The Count-down has begun. We are two months away from Kenya-Airways’ direct flights to New York from Nairobi.  Save for any unforeseen occurrence, the deal is done. For Kenya, the start of Direct flights to the USA is more than just our colours on American airspace.  It is big business and means more jobs at home. A number of stakeholders are salivating over the prospects of getting a foothold on the US market.  Cut flowers exporters have all along been salivating over the US market, the largest cut-flower market in the world. However, the cost of delivering them has been a draw-back. Cut Flowers: Gunning for  10% stake in The US Now with Direct flights, the market has drawn closer to home. It is only 15 hours away! The US Cut-flower market is estimated at US$ 2.5 billion and is dominated by Colombia which controls a large chunk of it. Kenyan flowers have a tiny 0.4 percent of this humungous market and officials in Nairobi ar
Post a Comment
Read more
More posts