Showing posts from June, 2018
Show All

Contraband Sugar Being  destroyed at Mombasa  The bulk of the contraband sugar being impounded in the country is smuggled through the Somalia border, we can report. According to a June 2017 FDD report, Kenya imports US$1.2 billion worth of Sugar from Somalia. The report cites an International Business Times report on the same dated June 4, 2014. That, from a country that does not own a single sugar mill!   At the current world Market prices of $349 per ton, that is 3.45 million tons of sugar. However, at the current domestic price of KES 76,000 a ton, we import 1.58 million tons of sugar a year from Somalia!  Local analysts doubt whether Kenya can absorb all this sugar. The demand for sugar in the country is about one million tons a year. The analysts however, say that this could be the total value of all contraband from Somalia including low-volume but high- value goods such as electronics, apparel and textiles. Sugar could form perhaps, 10 to 20 per cent of the contraba
4 comments
Read more

Did Ndogo Kundu By- pass cost $100M a kilometer?

Ndogo Kundu By-pass: an Aerial view: Courtesy Kenha  That would make it the most expensive road project in the world, beating Uganda’s Entebbe expressway by Kshs 100 million (US$1 million).  The Expressway was branded the most expensive road in the world by Uganda’s Parliamentary Committee on State Enterprises. The committee protested that “a kilometer of road cost an alleged $9.3 million.” Of course, the politicians were wrong –either innocently or by design but mainly by design. It turned out that they wanted “to fix” a PS who refused to approve a two-week “bench-marking trip” for them. The Highway cost roughly $2.325 million per kilometer. Back to Ndogo Kundu. Did a kilometer of road cost shs 1 billion?  Yes and No. Here is why: we are accustomed to counting the heads of cows to know how rich we are. Roads engineers count the legs to cost a road. So they come up with more legs than heads. There is more tarmacked road (the legs) than the distance (the cow).To that ext
Post a Comment
Read more 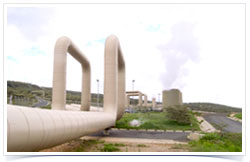 A Geothermal Power station in Olkaria, Kenya The African Development Bank has lent a total of US$50 million to Quantum Power East Africa GT Menengai Ltd. This is the first loan to a private sector player in Kenya without a sovereign guarantee. The firm plans to generate 35 MW of geothermal power from Menengai wells. The loan is in two sets; a senior loan of US $29.5 million and a concessional loan of US $20 million.  The firm has already signed a Steam Supply Agreement with GDC, the developers of the Menengai geothermal wells. Quantum has also signed a 20 year Power Purchase Agreement with KPLC, the power distributor at US$0.007 per Kwh. The Geothermal Development Corporation, GDC, is a state-owned corporation whose business is to develop geothermal wells at Menengai. It is currently developing 400 MW-almost 26 percent of the current capacity- of geothermal power from its Menengai fields. The firm hopes to generate a further 3000 MW of by 2020 from the same fields rising
Post a Comment
Read more

Lamu: Gearing to be energy hub in Kenya? 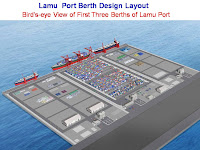 Lamu city and county are set to become the energy capital of Kenya. With a Port with oil export jetties, a 120,000bpd refinery, two power generators pumping 1150MW into the national grid, the County, and the port city are set for greater things in future. Other things remaining the same, Lamu could in future become the Qatar of Kenya, if not East Africa. The city will be the destination Port for exports leaving or entering East Africa’s landlocked Northern members- Ethiopia and South Sudan, according to LAPPSET and Vision 2030 goals. Even without the neighbours, it is the gateway for Kenya’s oil exports. And with a refinery to boot, it could soon become a major white oils market.  Lamu, Isiolo, and Turkana were conceived as “resort cities” in the Vision 2030 package and also the LAPSSET program. Resort cities are mainly tourist attraction sites. However, they have metamorphosed into energy cities due to developments in the energy sector.  The growth of the energy sector is al
Post a Comment
Read more
More posts