Showing posts from September, 2019
Show All

Joshua Oigara: CEO KCB Group This is the year of Mergers and Acquisitions in the financial and telecoms sectors in Kenya. According to the scheme of things, these marriages must be consummated by the end of this year.   Finance and Telecoms are the vibrant sectors of the Kenyan economy. The mergers will produce titans, especially in the financial sector, dwarfing their competitors. In the financial sector, Kenya’s largest bank by assets, Kenya Commercial Bank will acquire a 100 percent stake in National Bank of Kenya in a share swap. Another group, the NIC group will merge with Commercial Bank of Africa, also, in another share swap, creating the third-largest banking group with more than 100 branches in the country and the East Africa region. These acquisitions will place the Kenyan financial market firmly in the hands of indigenous banks. Local banks have swiftly shunted local branches of Multinational Banks, such as Barclays Bank and Standard Chartered Bank to the lowe
Post a Comment
Read more 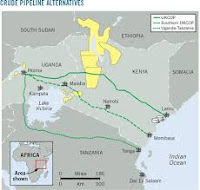 The three potential Routes to evacuate  Ugandan crude oil The French Oil major, Total Oil SPA's foray into East Africa's crude oil industry has run into a huge storm. In what looks like a bad Omen,   Total has stopped all activities to do with East Africa Crude Oil Pipeline. This follows a double blow to Total SPA which owns 33 percent stake at Hoima Oil Wells in Uganda. The firm was to buy a 22 percent stake from its partner Tullow for $900 million. However, the deal has collapsed following a disagreement with the government over Capital gains tax. The death of the buy-out deal left the construction of 1450KM   East Africa Crude Oil Pipeline, EACOP, from Hoima to Tanga Port in Tanzania, which was connected to the sale, in a limbo. That Total Oil SPA has abandoned the project, putting its implementation in doubt is a Bad Omen for the French Oil major.   Total had gunned for a majority stake at Uganda’s crude oil Wells through a buy-out of 22 percent of Tullow’s
Post a Comment
Read more

The trucks that evacuated Crude by  Road to Mombasa Kenya has just exported its first 200,000 Barrels of Crude oil from its Lokichar basin. The export will earn Kenya some US$12 million. This is a minuscule amount compared to Kenya’s GDP. However, it is significant in that, it demonstrates the advantages of decisive action compared to indecision: Resolute action has positive results at a cheaper rate while procrastination delays action and blocks the benefits accruing from firm decision making. The export,  billed "   Pilot oil export" has thrust Kenya into the oil exporters club, seven years after the first barrel was discovered in the Lokichar Basin, in Turkana county. Kenya’s crude is said to be among the best in the world, at par with the Brent Crude C1. Sold at $60 a barrel, it was a windfall of sorts for the country, since officials in the Ministry of Energy and the developer, Tullow Oil, say it was viable at US$56 a barrel. On the other hand, Reuter
Post a Comment
Read more
More posts